This morning started out like any other morning. Dragged myself out of bed, drank my first (of  many) cup of coffee. Then headed for the shower. After dressing I did what I do every morning. Clean the cat box. Exciting I know, but someone has to do it.

I have two beautiful gray and white cats. Brother and sister, named Notwen and Pouncer. And they are big cats! Notwen the male probably weighs a good 30 pounds, Pouncer maybe a bit less. Every morning I have to clean their cat box, because well, being big cats they produce a lot of waste! 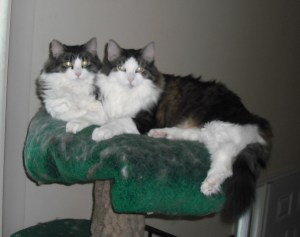 Most mornings I clean it without really thinking about it. I mean it’s cat poop. Do I really want to think about cat poop? This morning Notwen is sitting watching me, probably wanting me to hurry up so he can use the kitty bathroom. And my mind goes back through the years and all the fur babies I’ve had. Almost every single one of them rescued from bad situations. They were either in an abusive home, or they were running in the streets, unfed and unloved. Neither situation I can tolerate.

Memories came rushing back of my past pets. My babies. There was Bubba, who when she was a tiny pup I couldn’t tell if she was female or male, but the name Bubba seemed to fit, and so it stuck. She was a pure black Cocker Spaniel, and one of the most intelligent dogs I ever owned. Then there was Gray, a beautiful gray German Shepard I rescued off the streets in Ft. Worth, TX.

Gray had been beaten and starved. I took her to my favorite vet and he told me she was about 6 months old and must have been beaten before because he could see old wounds and old broken bones. My heart was hers from that first day till she passed 13 years later.

Can’t forget about the cats in my life either, especially Fred. Fred was a special cat that showed up one day and stayed. He was a male cat, a beautiful black and white short hair. Fred had an identity problem though. Well, Fred thought he was female. One day Fred showed up with a very pregnant female cat I named Wilma. You know Fred and Wilma, from the Flintstones??

Now, I really don’t think Fred was the father of Wilma’s kitties. Because Fred just never wanted a female in that way. Fred brought Wilma home because he wanted to raise her kittens. Yeah,  he even tried nursing them, but that idea didn’t go far. They finally worked out a deal, Wilma nursed the kittens, and Fred took care of them otherwise. He wouldn’t even let her near them unless she was nursing! Wilma didn’t seem to mind, she lounged in the sun and enjoyed a life of leisure.

Some of my memories are bitter sweet. But, they all made me smile this morning. Made my day a little brighter. I never had children of my own, except for my fur babies. Those children gave me so much love, so much companionship, so much unconditional acceptance. My life was forever touched with their love.

10 thoughts on “A Morning of Memories”