Yes, yet another post about NaNoWriMo. I’m sure most of you that aren’t participating in this ultimate write  fest are a little sick of hearing about it. 🙂  But be prepared to hear lots more while the ones that are doing NaNo write about our woes and triumphs for the whole month of November.

For those few who don’t know what NaNoWriMo is let me explain. It is, as stated before, a write fest. Starting November 1 to the end of the month every one who joined will be trying to write 50,ooo words that month! Yes, 50,000 words! Break it down and it’s 1667 words a day. Which for me doesn’t seem quite as scary. What’s in it for the writer you ask? Well, for one we get to write 50,000 words in one month! Also, hopefully we get a book out of it. There will be no editing during this writing process, we just won’t have the time for that. After it is all done, and with a lot of editing we just might get that book. Here’s hoping. Also, if we do the 50,000 words we get a certificate saying we did it! We can post it on our websites or blogs for bragging purposes. Believe me it will be worth bragging about!

Now, I might be naive in a lot of things  about writing, but not about having a great finished book on December 1. This is going to be a really rough draft of the book. I can not state rough enough! There is no way possible it will be ready for someone else to read! What I will have is a 50,o00 word draft that I can edit the hell out of. It’s more then I have now.

This will be my first year of attempting the feat. Am I nervous? Surprisingly no. I’m not. Either I’m naive or stupid! Nah, I just use my power of positive thinking. I picture myself accomplishing it and that helps a lot in keeping the nerves down to a bare minimum. I just hope it stays that way. Although, I’m thinking during the month I will be too damn busy to worry! We shall see.

Weeks ago when I decided to sign myself up for this, I had decided on what story I was going to try to write 50,000 words about. You, my dear readers have gotten a glimpse of this story. It is called “The Key“. After much deep thought, I decided to go with one I had slightly started all ready. This story and the characters grabbed my imagination and  I thought I could go far with them. Is having written basically the first chapter cheating? I don’t think so and I’ll explain why.

Most writers do a whole lot of what I call fore play on what they will be writing. They do research, outlines, character building, things of that sort. They plan things out. I don’t. Again maybe I’m stupid. But I’m a complete ‘pantser’. I write as I go. I make very little outlines. I do have a small notebook by my computer and I put down the characters names, ages, and quirks. Truthfully, the only reason I write these things down is so I will remember them farther on down the line in the book. It’s not for everyone. But it works for me. It’s just how I roll.

I let my characters write the story. It is after all their story! I have tried in the past doing outlines, but I never seem to stick to them and for me it takes the fun out of writing. My characters never fail to surprise me!

I will keep you posted about my progress with maybe snippets of the book during the month of November.

Would that be something you as readers would be interested in? Let me know.

I will try to do postings at least a few times a week. Depends on how tired my fingers get from typing. ha!

I also have other exciting news from NaNo, but will wait a bit more before revealing it. I don’t want to jinx it! Hopefully it will turn out the way I want it to! Wish me luck in my quest, I would keep my fingers crossed but will need them for writing! 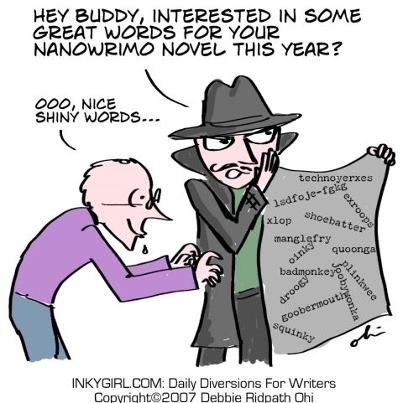 19 thoughts on “My Two Cents About NaNoWriMo”