First thing, I want to give a big Thank You! to the Hookster for giving me the idea for this post. Thanks again Hookster! You can read his funny blog about life as a bellman here! (and check out his book!)

We had a short discussion on me bringing ‘normal’ back. A lot of the blogs I read are authored by some really funny, sarcastic, creative people. I mean these people are just awesome. They are not what I consider ‘normal’. Now me on the other hand, I’m not funny, nor sarcastic, and I don’t take great photos. I’m really not very creative on my blog. I just write stories, either fiction or from my life. I’m normal. I think.

After my conversation with the Hookster I decided to try to find out what normal is. To see if I am truly normal, or if it’s another figment of my imagination.

The definition of normal via Dictionary.com is this:

1. conforming to the standard or the common type; usual; not abnormal; regular; natural.

2. serving to establish a standard.

approximately average in any psychological trait, as intelligence, personality, or emotional adjustment.

b. free from any mental disorder; sane.

So according to the dictionary, yeah I’m pretty normal, except for the ‘sane’ part maybe. After all I am a blogger. Now, let’s go see what the Urban Dictionary has to say.

a statistic based upon a majority or

An idealistic state of being that remains as such. Because the idea of such a state varies from being to being and any set standard is nonetheless someone elses idea of what it is this condition warrants satisfactory confirmation of being amongst the confirmed members of such class, by the individuals code

Let’s have some fun with this normal thing! I will add my very first poll. Then you can all vote if I’m normal or not! It’s anonymous, so don’t be afraid. Be honest! I’m trying to bring the sexy back to normal. (if it was ever there). Did I succeed? 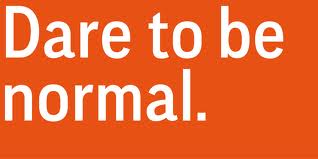