Merry Christmas Eve, people! Hope you have loads of fun today! If you are still shopping for presents, I hope you find tons of sales! Either way have a wonderful day and evening!

We here in Canada will be having three days of merriment? Ok, maybe two, because the 26th is Boxing Day here and that means commercialism craziness! It’s our version of ‘Black Friday’. It means stores will be running big sales and there will be line ups and tents in front of stores. Me? You’ll find me safely ensconced at home with a nice cup of coffee and slippers on my feet doing what I do best, writing on the old computer.

I’ll be having a relatively quiet Christmas. And it’s not going to be white! Darn it! The one day I want snow it won’t. It’s actually warmed up enough the past two days to melt what snow we had. Then after Christmas and for New Years we’ll probably get a damn blizzard! Eh, it’s all good I don’t go anywhere for New Year’s either. Too many crazies out there.

So let’s get to it shall we? Celebrate! 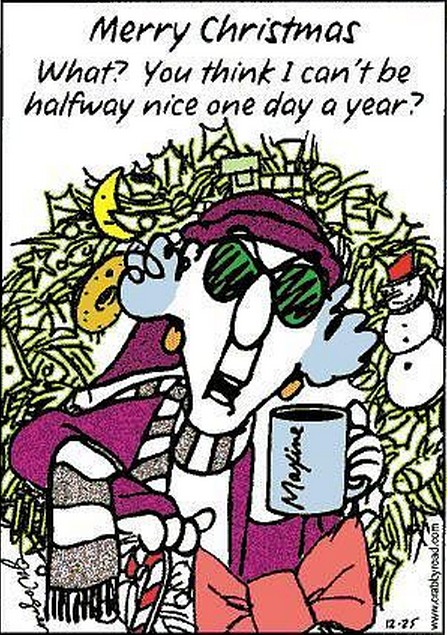 Christmas Eve ~~ We all know it’s Christmas Eve. Some parts of the world it may even be Christmas Day all ready. Merry Christmas! Some families have Christmas dinner on Christmas Eve and some attend church services. Traditionally, the last white candle in the center of the Advent wreath is lit on Christmas Eve to symbolize the coming of Christ. Traditions are a big part of the holidays and Christmas Eve is no exception. Every country has their own customs that make this a special holiday.

Enhance a cozy atmosphere with Christmas music and light some candles to welcome your guests. If you have a Scrooge in your family, bribe him with some good food and shower him with love. He’ll be sure to lighten up. Whatever your traditions are, embrace them. They are part of your heritage!

Old family customs are nostalgic but sometimes not practical in this day and age. Try mixing some old traditions with new ones. If you want to be out and about on Christmas Eve, going out to see a holiday movie or a play will serve that purpose and add some holiday cheer. Check in with the personnel at a local nursing home to get an idea of what residents will not have family in town. Pay them a visit and give them a small, useful gift, all in the spirit of Christmas.

National Egg Nog Day ~~ Now you all knew this day had to happen at some point in December, as Egg Nog is the drink of the month. The traditional recipe for eggnog is milk, cream, sugar, beaten eggs, spices, and sometimes alcohol. The type of alcohol depends on the country where it is made. In Europe, eggnog is traditionally made with white wine. Americans drink it with bourbon or rum while Peruvians use pomace brandy and Germans use beer.

And because I’m the good egg (pun intended) that I am I went and found you a decadent egg nog recipe. It has chocolate in it people, white chocolate. Go here for the recipe and enjoy!

Today is another very short list, so I thought I would include this poem from Maxine (of Hallmark fame) in the way of ‘Twas the Night Before Christmas’. I thought it was funny, hope you do too.