Hello people! Here is part 2 of my true story about a haunted mirror. Part one I did yesterday and you can find it here, if you haven’t read it yet. 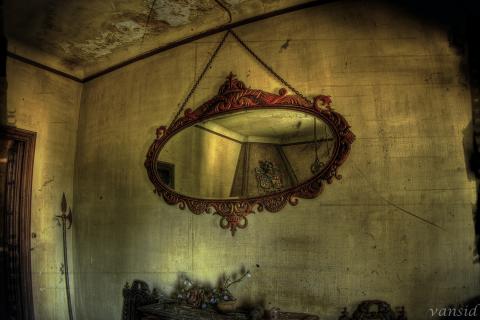 I don’t know what woke me later that night. Might have been the dog whining at the door. I laid in bed for a few seconds as my eyes adjusted to the darkness of the room. I heard my dog pacing outside the open doorway. My heart was pounding, I could hear the thump, thump, thump of it in my chest. I turned my head towards the mirror and watched fascinated as the red spots moved quickly inside of it. I wanted to shake my ex awake, but just like the night before I couldn’t seem to move anything but my head. The red spots within the mirror were moving like a swirling whirlpool, coming together to form an image. It was the same image I saw last night, but in the doorway. The image of the man holding an ax!

I wanted to scream! My mouth opened, but no sound came out, just big gasps of air as I tried to form a scream, a yell, anything! I tried to convince myself I was just dreaming, but I knew I wasn’t dreaming. I was wide awake. I could feel a cold draft of air, I could hear my dog whining in the hallway, I felt the sheets under my body, a slight wrinkle in the sheets making itself felt in the middle of my back. I knew I was awake and I knew it was all real.

Suddenly the swirling red dots stopped and then disappeared. That scared me even more. I turned my head swiftly to face the dark doorway and there stood the shadow again, just like last night!

I couldn’t hear my dogs anymore, I couldn’t seem to hear anything but the hard beating of my own heart. I was gasping for breath, sure I was going to die that night. The shadowed man slowly entered the room and started to move around the bed to where I was laying. I was never so terrified as I was right then! I had been in some scary situations before, but nothing like I was experiencing this night. I kept trying to scream, but the most I managed was a moan. My head was thrashing from side to side as the shadow relentlessly moved toward me. Suddenly I saw an arm move upward and at the end the shape of the ax was well-defined. I was moaning more and more, trying to scream. The arm raised higher and higher. I moaned louder, trying like hell to scream. Shaking my head back and forth like a mad woman.

The moaning and thrashing finally woke the ex, just as I thought the shadow ax was going to fall. The ex grabbed me and shook me hard. He yelled my name and the shadow man with his deadly ax disappeared. I started crying, great sobs left my throat when not 10 seconds ago I could hardly make a sound. My poor dog was barking like crazy and seeing me in such distress, he conquered his fear of the room and I felt him jump into bed with me. The other 3 dogs soon joined him. Needless to say it was bedlam for a few minutes with my ex yelling at me, asking me what was going on, the dogs barking, all 4 trying to crawl on top of me and with me sobbing like a lunatic.

I finally calmed down enough to try to explain to the ex what happened. I glanced fearfully at the mirror and saw…. nothing. No red dots, no shadows, nothing. I don’t know if I was relieved, or scared about that. The ex thought it was just a nightmare. He had turned on the lights once I started to calm down. He moved the mirror and looked behind it and of course saw nothing but the wall and maybe some dust.

He had dealings with Abe, my personal ghost before, so he wasn’t completely skeptical. He knew I ‘saw’ things he couldn’t always explain. So, as much as he wanted to tell me I was an idiot, he didn’t push it. He just told the dogs to shut up, me to go back to sleep, shut the lights off and lay back down under the covers. The dogs, bless them stayed with me that night. The only one that slept any more that night was the ex.

The next morning as I was having my coffee, I sat at the kitchen table and went back over the night’s happenings. I tried like hell to convince myself that it had all been a nightmare, but I knew deep down that it was real, that it happened and I wasn’t crazy like my ex would like me to believe I was.

I went on with my day, trying to put the night’s terrifying experience behind me. The dogs stuck with me all day. I avoided the bedroom and did things in other parts of the house. As it got later in the day, my fears mounted. I knew I couldn’t say anything to the ex, as he would just laugh at me. So I kept quiet. The dogs sensed how I felt though, as animals will. Finally, I couldn’t avoid it any longer, it was bed time once again. With my heart in my throat, I waited till I couldn’t anymore and went to bed. The ex was all ready sound asleep. The dogs stayed in the hallway.

I held a flashlight in my damp palm and slowly walked to my side of the bed. I looked at the mirror and once again saw the red dots. They weren’t moving, but they were there. I turned the flashlight on them and they disappeared! I quickly shone the light around the room, careful not to wake the ex. Nothing. I saw nothing, no shadows, no red dots, no ax. Breathing a bit easier I got under the covers and tried to think of pleasant things. The dogs were quiet, the ex was snoring, I felt a tiny bit better. I drifted off to sleep with the flashlight gripped in my hand.

I woke when I heard something hit the floor. I’ve always been a restless sleeper and while moving about the flashlight fell off the bed.  My eyes popped open and my breathing almost stopped when my eyes fell on the mirror and saw the red dots swirling as they did the night before. Oh God, not again! Please not again!

The dots disappeared suddenly and I rolled over to look at the doorway. There it was, the shadow man and his ax! Coming ever closer to me, with me not being able to scream. It was almost the same exact thing happening as the night before. Down to me waking the ex with my moaning and thrashing about. The dogs jumping on the bed once the shadow was gone, the ex pissed because I woke him up again in the middle of the night.

It took two more nights of absolute terror to finally convince the ex to take the mirror down and out of the house. It was too big for me to move by  myself or I would have done it long before that. There was a small shed on the property, I had the ex move the mirror to it and put a lock on the door. We couldn’t destroy the mirror for two reasons. One it wasn’t ours to destroy. Two, I wasn’t sure if breaking the mirror would release the spirit or destroy it, so I went with caution and just had it locked up away from me and the dogs. The ex wasn’t pleased, but I didn’t care, I just wanted it gone.

After the mirror was out of the house, I sat in my bed and meditated, felt the evil leave the room. I know it sounds crazy, but that’s what happened. I never had another nightmare in that room. We stayed there for about six months, then moved to another house in a different small town close by. I don’t know what happened to the mirror after that. If whoever eventually bought the house found the mirror and kept it or got rid of it. I never heard. I was just glad to never have encountered it again, nor anything like it since. I tell  you one thing though, I never forgot and the memories are as fresh as if they happened yesterday. I truly believe that mirror was haunted.

What do YOU think? Do you think it was haunted? Have you experienced anything like this? Let me know!