If you haven’t read previous chapters I have a category listing on the side with the title 2015 April A-Z challenge. You can find all the chapters there. Thanks for reading! 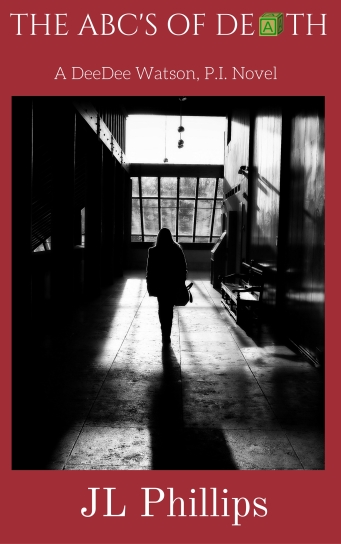 I catch Tee before he hits the ground. I’m just glad at this moment that he’s not a Saint Bernard. The crazy dog is licking my face like it was last nights steak dinner.

I settle him in my arms. I don’t want to let him down on the ground as I’m not sure what is sharing this hole with us, if anything. There could be snakes and I didn’t save my buddy just so he could get bit by a snake.

Snakes? Oh great. Now I’ve put that idea in my head. I hate snakes. I hope Angela gets back with that flashlight soon. I stand in that small circle of light that is filtering through the open hole. This has been a long morning.

“Dee! I got the flashlight and the satchel.” I hear Angela’s voice overhead. Her head appears as she lowers the satchel and lets go. I catch it with the hand that’s not holding Tee.

“I put the flashlight inside. I spotted a ladder in one of the sheds. I’ll drag it over here. Hang on!” She disappears again. I sure hope it doesn’t take her long with the ladder. I want out of here.

I kneel down and search through the satchel. I find the nice heavy flashlight and turn it on. Still holding Tee, I flash the light around. I don’t see any snakes. I also don’t see any other way out. There are some old crates on one side. The hole is bigger than I thought it would be. Going back several feet. From what I could see, it was about twelve by twelve feet. Someone had used it to store stuff.

I’m not going to be down here long enough to worry about the crates. Angela should be here soon with the ladder.

“Dee! I’ve got the ladder!” I hear metal clattering and see her pop her head over the hole again.

“Damn, I didn’t know ladders could be so heavy. Let me catch my breath then I’ll slide it down to you. I sure hope it’s long enough.”

“Anything is better than nothing. Thanks, Angela.”

“Ok, let’s do this,” Angela says, as her head disappears again. I hear the metal of the ladder clatter again then a muffled scream.

“Angela! You ok up there?” I hear nothing for several seconds.

“Angela!!” I yell again. A head appears over the hole once more. The face is in shadow, but the head doesn’t look like Angela’s.

“Well, well, well. What do we ‘ave here? It’s Dorothy and her little dog Toto! Guess you ain’t in Kansas anymore, eh?”

Crap. I know that voice. The thug from this morning.

“That must make you one of the flying monkeys then.” I answer. What’s the jerk going to do? Throw me in a hole?

“Bitch! You broke my damn finger this morning.”

“Didn’t your mother ever teach you to keep your hands to yourself? Consider it a lesson learned.”

“We’ll see who learns the lesson. You’ll ‘ave a bit of time to learn yours. Have fun starving in your hole, bitch.”

I didn’t say anything. The jerk has a point. Dammit.

“Here I thought you would enjoy teaching me a lesson yourself.” Maybe I can goad him to get me out of this hole. At least I’d have more of a chance.

“I would normally, but I got orders to find the deed to this place. Bimbo here is gonna tell me where it’s at. Eventually.”

I didn’t like the sound of his laugh as he disappears from view. I turn off my flashlight and step back into the dark. I didn’t want to take any chances that he might decide to shoot me instead.

Minutes pass without further noise or voices overhead. The sinking feeling in my gut tells me they’re gone.

“Hey, jerk!” I yell. “Come and deal with me yourself! Or are you afraid of a woman?”

Nothing but silence answers me back.

I always enjoy comments and/or constructive criticism. Or, you could just say hi! Thanks!