I saw something on Facebook last night that got me a bit upset. Now, I know Facebook is good for that. Upsetting people. What I saw last night I took a bit personal and I’ll tell you why.

Someone made a Facebook status about shopping at the grocery store and the checkout lady asking if they wanted to donate to the food bank. They joked about it. One of their followers said something along the lines of….’they could donate a can of corn, at least whoever gets it will have their poop decorated for Christmas’. 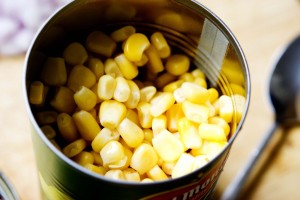 Meaning that corn is hard to digest and the poor person who ate the corn will have something decorated for Christmas. I’m sorry, but I found the whole thing in very bad taste in more ways than one. I thought about it most of the night. It was on my mind first thing when I got up this morning. So I decided to write a post on why this was wrong and why it upset me.

Normally I don’t let things on Facebook bother me. I’m not on it that much and well…..people are stupid a lot of times. I don’t tolerate stupid that well.

The husband and I get a food basket from our local food bank every month. Yeah, I’m that person who will get that can of corn. But hey, at least I’ll have something decorated for Christmas.

Or it could be that nice elderly lady next door or across the street. You know the one. The one who always smiles and waves at you and the kids. Who gives you homemade cookies every Christmas. Yeah, that nice old lady.

The one whose husband died a few years ago and now it’s just her and her cat. The one who if you went in her house and looked in her cupboards you would find most of them empty of food. Because she can’t afford to go to that nice grocery store and stock up. She gets a food hamper every month from the food bank. If she didn’t do that, she would go hungry. Even that can of corn is welcomed in her home. It’s something to eat.

Sure, she gets retirement money every month. But it’s not enough to cover the bills and food. The bills come first. She doesn’t want to lose the house her  husband and her worked so hard all their married lives to have. They even had some savings. I nice little nest egg for their retirement years. That got ate up when he got sick suddenly. Then he died. The nest egg gone. The money she has coming in is now half of what it was. Just enough to pay the bills, if she keeps the thermostat down.

Most of the clients of food banks are the elderly. Did you know that? It’s true……look it up. I did.

As for the old neighbor…She gives you those delicious homemade cookies every Christmas because she hoards what little sugar she gets from the food bank. Maybe the flour too. She likes to make cookies for your kids. As she doesn’t see her kids or grandkids that often. So she hoards through the year what she needs for baking and eats what she can.

If we are really lucky we get some kind of meat. Usually not, though. We might get a package of hotdogs, or a pound of hamburger. One time we got a single piece of chicken. Which we had to throw away because when we thawed it out…it was spoiled. We’ve thrown away most of the meat we have gotten because it was rotten. Yeah, we are living high off the hog.

That’s what that old neighbor gets too. Maybe she is diabetic like I am. Oh, then we get a special bag of goodies from the food bank. It is always the same. Always.

Why they insist on giving a diabetic cans of pineapple is beyond me. They are very high in natural sugar. Duh….diabetic.

So, when someone makes fun about giving donations to food banks….think a little. Because of medical issues the husband and I can’t work. Or we would be working. We don’t like having to get food bank hampers. We  hate it. But, we have to eat.

So does most elderly. Oh yeah, that neighbor? She has a cat. The cat is her only companion. It’s company on long lonely days and nights. It’s warmth on cold winter evenings. So on the months she might get a couple of cans of cheap tuna. She feeds her cat the tuna. She doesn’t eat it herself. The cat has to eat too and it usually does before she does. Because that’s what we do.

We’ll be looking forward to that can of corn. At least something will be decorated this Christmas.

Catch A Cootie By Its Toe