It’s been quite a while since I wrote one of these Monday Meeting posts. So grab yourself something to drink and sit a spell. 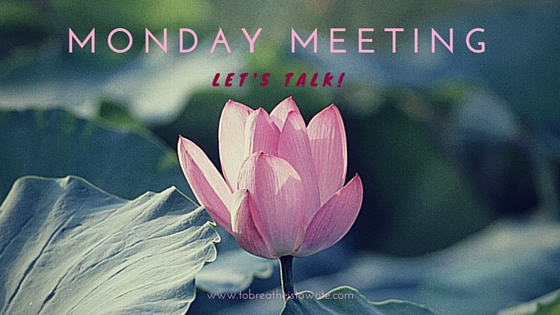 Let me just freshen my coffee and I’ll tell you what I’ve been up to.

Ah, there we go. So, how is everyone doing? I’ve read about the terrible shooting in Orlando. So sad. I’ve read a lot of comments on posts about the shooting and let me ask you something…..has everyone gone completely crazy?? I tell you the comments are almost as bad as the shooting! People! Where has your common sense gone? Where is your compassion? Your love of other human beings? It saddened me that there were so many hateful comments. So many people took the opportunity to rant about the US government and blame Obama once more. Obama is no more to blame than I am! Come on people. One man went in there. One man made the decision to shoot those people. One man decided he was more important, more worthy, more whatever and decided to kill a bunch of strangers. One man with a gun. And his name wasn’t Obama.

Then, of course, you had comments that went off the rail about gun control. I won’t even go there. People need to wake up and smell the gun powder……but enough said on that also. My blog is not going to be the stomping ground for arguments. I won’t go there. I just feel so terribly sad for the many people affected by one man’s decision. The world is a scary, scary place where you have a place with little gun control and possibly a future president that is just as crazy and egotistical as the shooter.

I love my homeland, the USA but I’m so very sad of where it is right now and where it’s heading.

That’s about as political as I’ll ever get on here. Sorry folks. Just had to get it out there.

On to more personal news. The husband is finished with his chemo treatments. Yay!! This was his last month of them. He says he’s feeling better and his stomach seems to be doing much better. We have one more visit with the Cancer Clinic at the end of the month. Of course, he will have to have another CAT scan and colonoscopy to make sure everything is ok. They have already told us that he will have to be monitored for the next three to five years to make sure he stays cancer free. Still, it’s good to hear him say he’s feeling better.

That’s not going to help his health in other ways. He will always be disabled and in pain because of his back but at least we don’t have to worry too much about cancer now. And believe me, that was one big worry. It will also mean fewer pills for him to take, fewer doctor visits, less hospital visits. Less of a lot of things. So, it’s all good.

As for me. I seem to be in limbo. Ever since my mom died a couple of weeks ago, I feel like I’m just treading water. One good thing that has come out of it is that my sister and I are talking again. We are back to being friends……well…..back to being sisters anyway. Maybe the friend part will come later. I call her every weekend and we talk for a couple of hours. It’s nice. Especially since I was feeling a bit adrift as I used to call my mom every weekend.

Otherwise, I’ve been reading. A lot. One book after another. It’s what I seem to fall back on when I’m grieving. I remember I did it when I found out dad had died too. I just buried myself in books. Maybe I’m hiding. I don’t know. It’s my way to deal with things. I haven’t been writing. I just can’t seem to settle long enough to write. I do hope it will pass. I’m sure it will. Do you think it will?

I’ve also been cleaning house. Getting rid of stuff we don’t use. Just overall cleaning. It tires me out so I can sleep at night. It also makes me sore as hell but the place is looking good! I found out I’m not as young as I used to be. I tell you this getting older is hell. Things I used to do with ease, even ten years ago, is much harder now. I have aches where I never had them. Sigh. I hate that part of growing older. Better than the alternative, eh.

So, as with life, there have been bad things and good things going on. I’m hoping for more good for a while. I need to step back from the bad…..just for a bit longer…..and adjust.

How have you been lately?