The daily prompt today on WordPress is:

You’re locked in a room with your greatest fear. Describe what’s in the room. 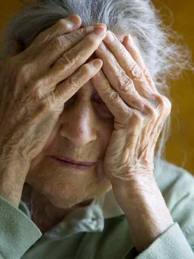 I had to think a bit on this one, as I have more than one fear. But they wanted my greatest fear. So I sat back and looked inward and this is what I came up with. Now I know most people would either refuse to point out their greatest fear, because they fear someone will use it against them. Which could be the case. My fear isn’t one of those.

Alzheimer’s disease is the most common form of dementia. It is a neurological brain disorder named after a German physician, Alois Alzheimer, who first described it in 1906.

I enjoy reading, writing, music, my pets, some people too much. I would hate to lose touch with reality. Even if reality sometimes sucks. I still want to be in the here and now. I don’t want to be, wherever you go when you get dementia. I don’t want to sit or lay there and stare off into space. I don’t want to forget the people I love. That scares me more then anything else.

Alzheimer’s disease is the most common form of dementia, a group of disorders that impairs mental functioning. (Dementia literally means loss of mentation, or thinking.) At the moment, Alzheimer’s is progressive and irreversible. Abnormal changes in the brain worsen over time, eventually interfering with many aspects of brain function. Memory loss is one of the earliest symptoms, along with a gradual decline of other intellectual and thinking abilities, called cognitive functions, and changes in personality or behavior.

Alzheimer’s advances in stages, progressing from mild forgetfulness and cognitive impairment to widespread loss of mental abilities. In advanced Alzheimer’s, people become dependent on others for every aspect of their care. The time course of the disease varies by individual, ranging from five to 20 years. The most common cause of death is infection.

I have had some rough times in my life. From childhood on, I’ve dealt with some pretty awful stuff. To me though this would be the worse. With all the other things I could move on, I had control over how I reacted. I had control!

People with AD gradually suffer memory loss and a decline in thinking abilities, as well as major personality changes. As the disease progresses, nerve cells in several brain areas shrink and die, including cells that normally produce critical neurotransmitters, the chemical messengers that relay brain signals from one nerve cell (neuron) to another. Acetylcholine is a neurotransmitter that is deficient in people with Alzheimer’s. As nerve cells continue to die, the brain itself shrinks and the wrinkles along its surface become smoother.

When you have Alzheimer or dementia you don’t have control. You lose it. You lose yourself. I would rather die then have that happen. Period.

By the final stage, plaques and tangles have spread throughout the brain, and brain tissue has shrunk significantly. People with severe Alzheimer’s cannot communicate and are completely dependent on others for their care. Near the end, the person may be in bed most or all of the time as the body shuts down.

So I would hate to be locked in a room with myself and not even know myself.

**Everything in blue comes from the website about Alzheimer Disease http://www.alzinfo.org/